Getting down to the last brick

It has taken a while, but our bricklayers are getting down to the last brick. The results have been well worth waiting for. The masons started on the southwest corner, which now looks like the picture on the left. The picture on the right shows the now completed west wall. 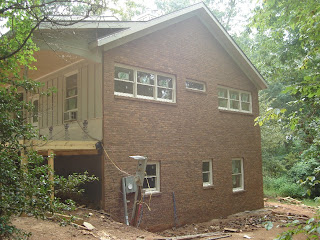 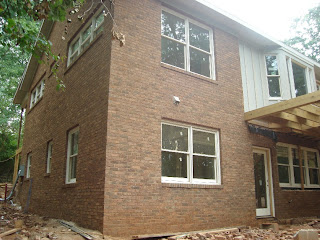 On the left side of that picture are the electrical connections: the temporary service panel and meter are in front on a separate post, and behind them, on the brick wall, is the meter base for the new regular service, which will be hooked up shortly.

Moving on around the house in a counterclockwise direction, we have the southside and the back of the garage, which was just completed this afternoon. The brick continues on the basement level, but not above the deck until we come to the master bathroom and the outside storage room under it. Those are also seen 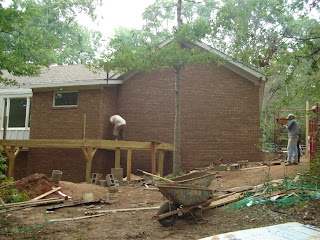 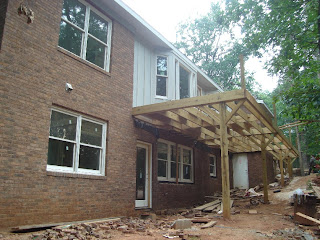 Those are also seen on the left side of the next picture, with the back of the garage on the right. The workers had just taken down the scaffolding after bricking the garage wall up to the top of the gable. Below you can see the workers on the ground who are in charge of hauling buckets of mortar up the the masons. 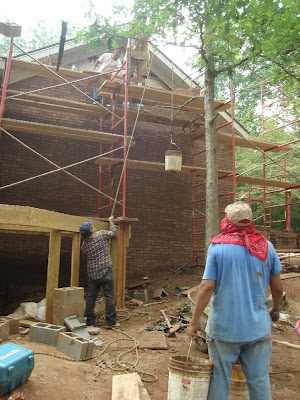 They are completing the gable brickwork. On the right is a view showing how the deck comes around the master bathroom. It will eventually have a ramp that will come forward from where the worker is standing on the deck framework. The ramp will slope down to the ground at a point near the corner of the garage and the bottom of the picture. 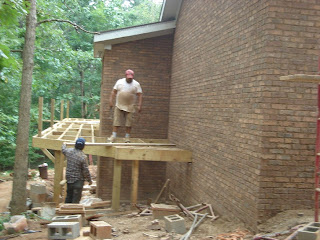 Inside the house, meanwhile, our builder George Wright is working on wood trim around doors and windows. Here he's putting a piece of trim under the kitchen window that will be over the sink, which will be just about where George is standing. Cabinets will eventually cover the wall in front of him and to the left. 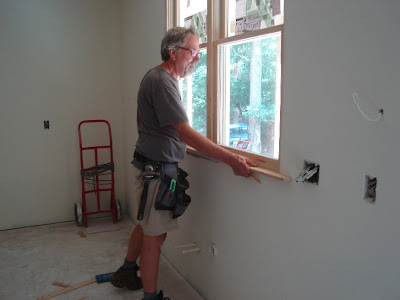 Today marks the end of 11 weeks since the beginning of framing on 4 May, and we have come a long way. All of the windows and most of the doors have been installed. The electrician has already installed most of the switches and receptacles, and will start on light fixtures, as soon as Manita and I pick them out. The brickwork will probably be finished up on Monday, and the masons will then start on the stonework.

The pictures below indicate how far we have come in just the last seven weeks. The one on the left shows what the living room looked like in my 4 June posting on the blog, with little more than framing, outside sheathing, and windows. Compare that with the one on the right, which shows the saw George is using to cut trim to put around the picture window, for example. 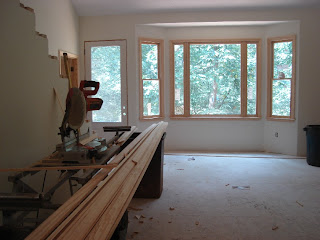 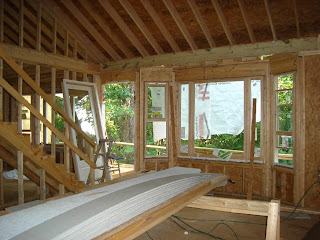 Folks, it's been a long posting, but we covered a week of work, and there was lots to cover. Have a good weekend, and I'll be back probably next weekend.  --oc
Posted by O C at 5:55 PM