The brick is up; now it's time to get stoned.

The past week began with the masons putting the final touches on the brickwork on Monday morning. Then they had  to wait until Friday for the stone to arrive, since the order had been increased slightly. Our builder George, however, continued with trim work and other carpentry. We also made the transition from temporary to regular electrical service, which happened in a somewhat unusual way. 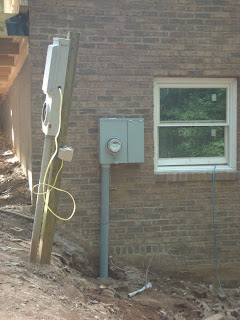 We were expecting Georgia Power to come and make the permanent hookup about midweek, but that had not happened. And so we forgot about it. Then Thursday night Manita came home after attending a long meeting at Sandy Creek Nature Center and dropping off a fellow board member from Kenney Ridge. I was already in bed when she arrived home at 9:30, saying that there was a truck parked in the driveway at the new house. I called George, since he had been working late, but he was already home. So, I got dressed, and we went over to see what was happening. As soon as I saw the truck, however, I knew it was Georgia Power, and I remembered that they were supposed to come and change the service. We found them using a blow torch to complete the insulation around the soon-to-be underground splice in the incoming line. I teased them a little about liking to late, but I knew that they, if anyone, should be used to working at all hours and in the dark. The picture shows the new service and old, disconnected meter base on the left.

The week was a little slow in the middle, but on Friday morning I found cars parked everywhere. The masons were back, and each seemed to have his own car. When I first arrived, they were busy putting on the lath and brown mortar base for the "cultured" stone (below). 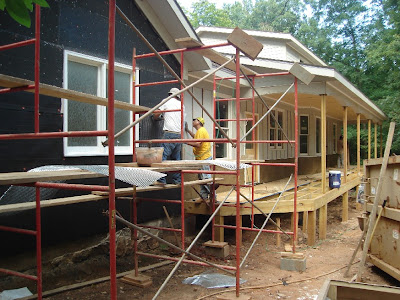 When I came back later in the morning, the workers had already started on the stone, and by that time they were taking a lunch break.

By quitting time, they had already installed most of the stone across the front of the house, including, for example, by the kitchen door. 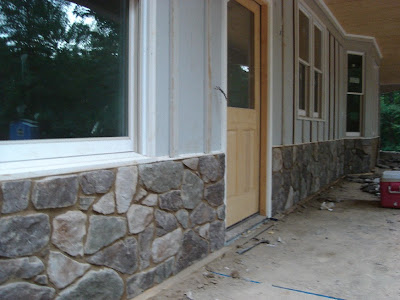 After the stone is finished, the Trex is laid on the porch and deck floor, and the board and batten Hardie Board is painted, this scene will be complete. In the meantime, however, a lot of stonework must happen before the outside is complete. Naturally, a great deal of work is still to be done inside. We're pleased with how much has happened since framing began just 12 weeks ago, and we're hoping that in another 8-10 weeks, we'll be just about ready to move in. Keep your fingers crossed!  --oc
Posted by O C at 6:55 PM