Landscaping in spring and summer

When we made our last post to the blog, it was last winter - December to be exact - and the rain garden looked like the picture below. 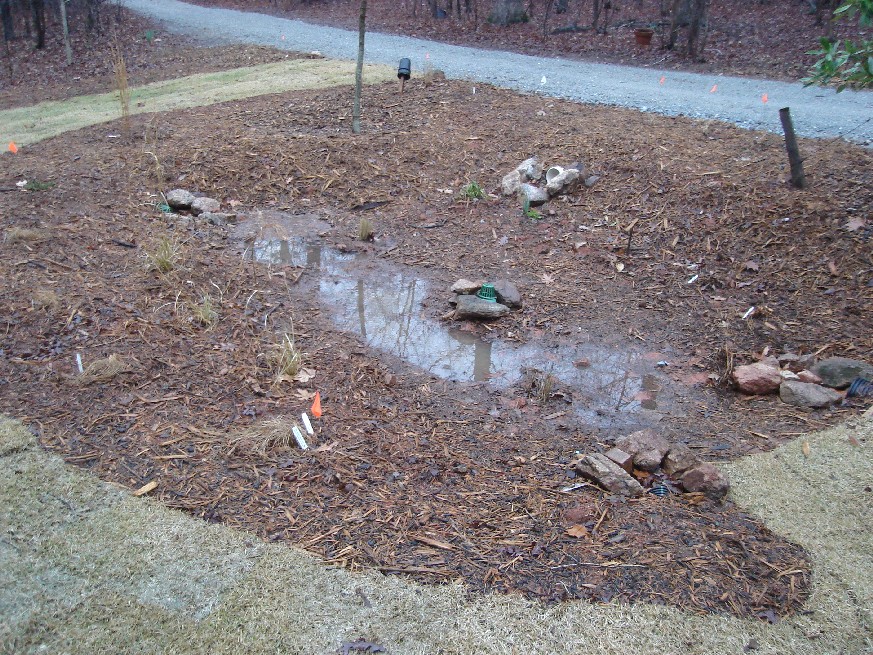 The pile of stones at the top near the driveway mark the point where the pipe under the driveway brings in water that has fallen on the far side of the driveway. The two piles of stones on the lower right side mark where water flows in from downspouts. On the left are stones marking where water flows out of the garden when it gets full. In the middle is a pipe leading to an underground storage cylinder filled with gravel; water stored there eventually seeps into the ground, along with the surface water seen in the middle. 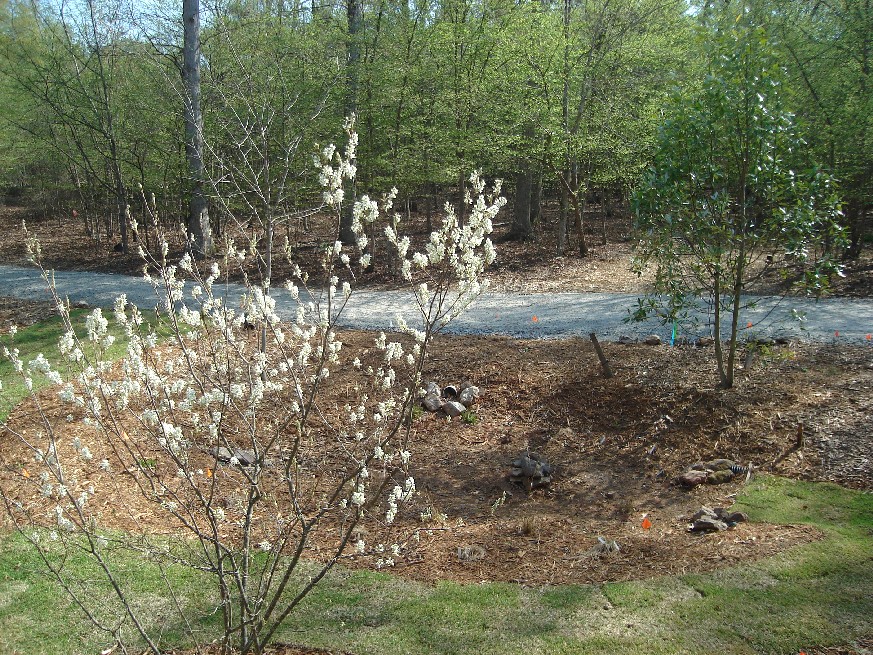 When spring came, the service berry by the porch steps was the first plant to bloom. Directly behind and near the driveway is the bare yellowwood tree, which is just beginning to leaf out. On the right side of the picture is the sweet bay magnolia, an evergreen. Below the zoysia sod, which was brown all winter, is beginning to turn green, as seen also in the next picture.

The picture below was taken from the driveway a little later: the blooms are now gone, the yellowwood has more leaves, and the grass is greener. 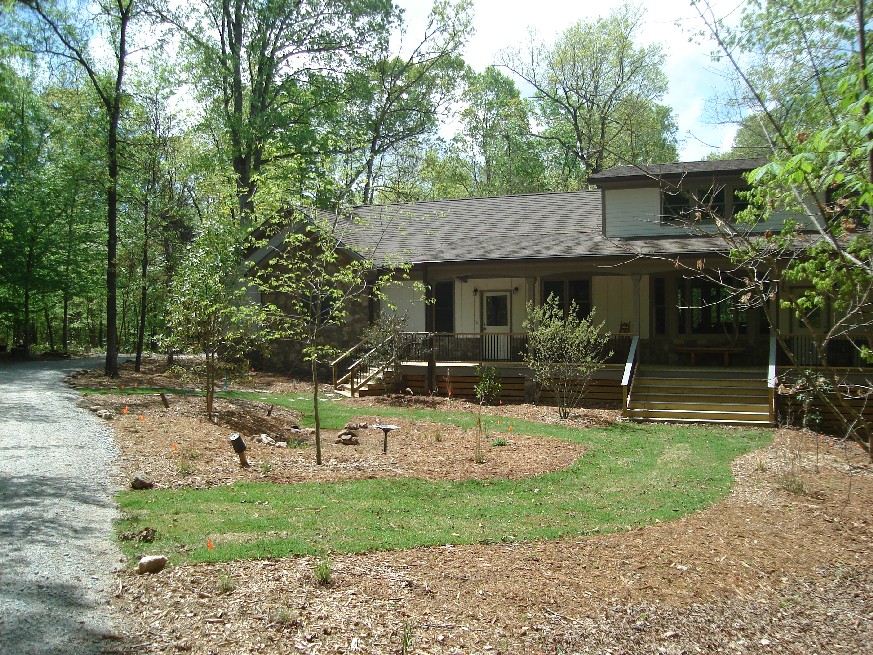 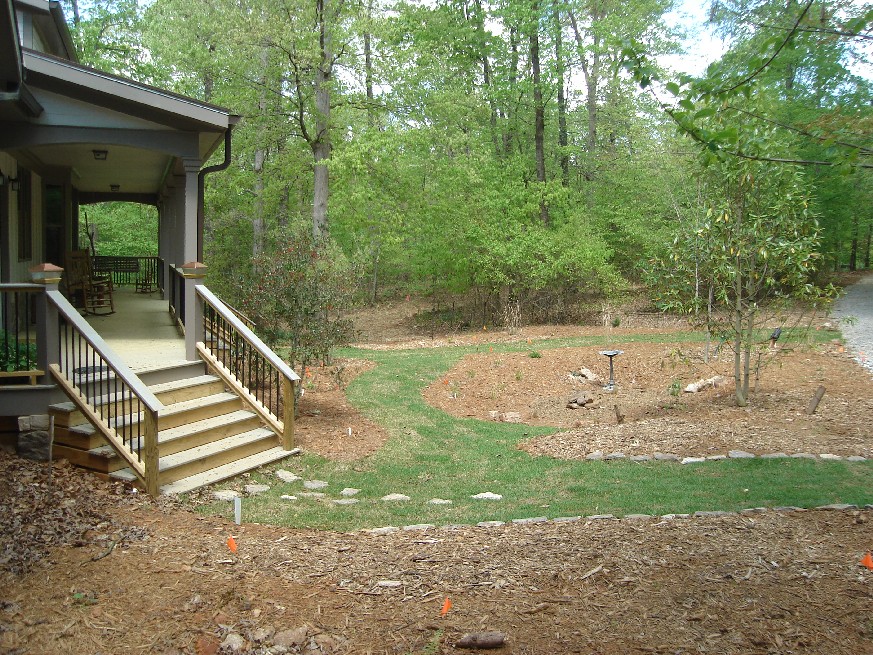 Still later, the grass is more solidly green, more plants in the rain garden are turning green, and the sweet bay magnolia is blooming. 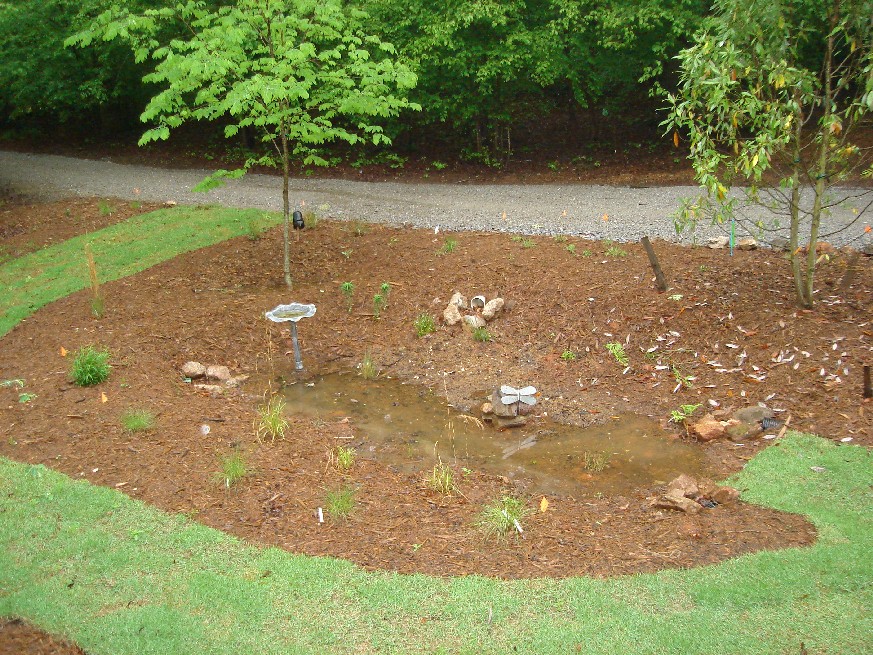 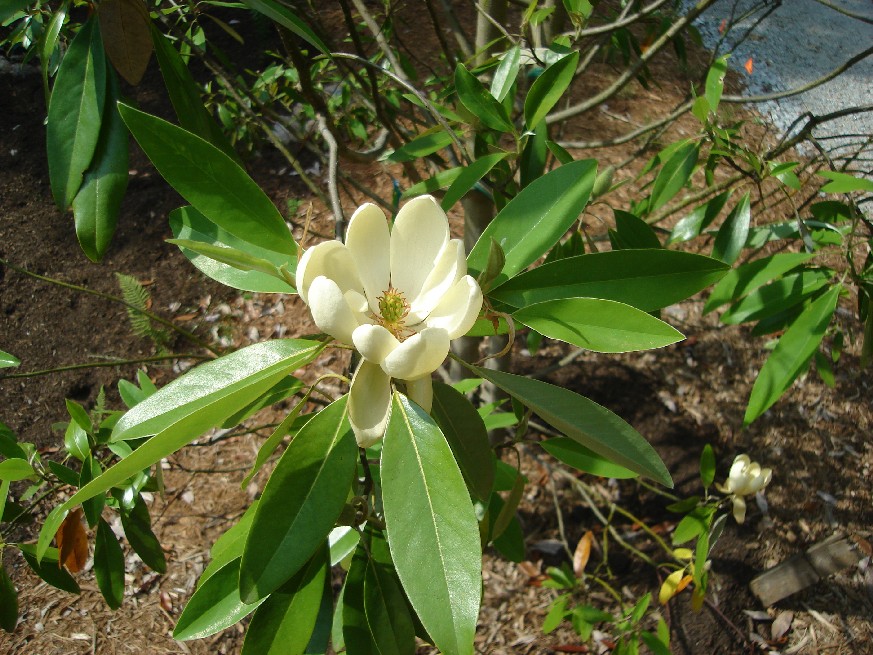 Below is a close-up of the magnolia blossom in the sun. 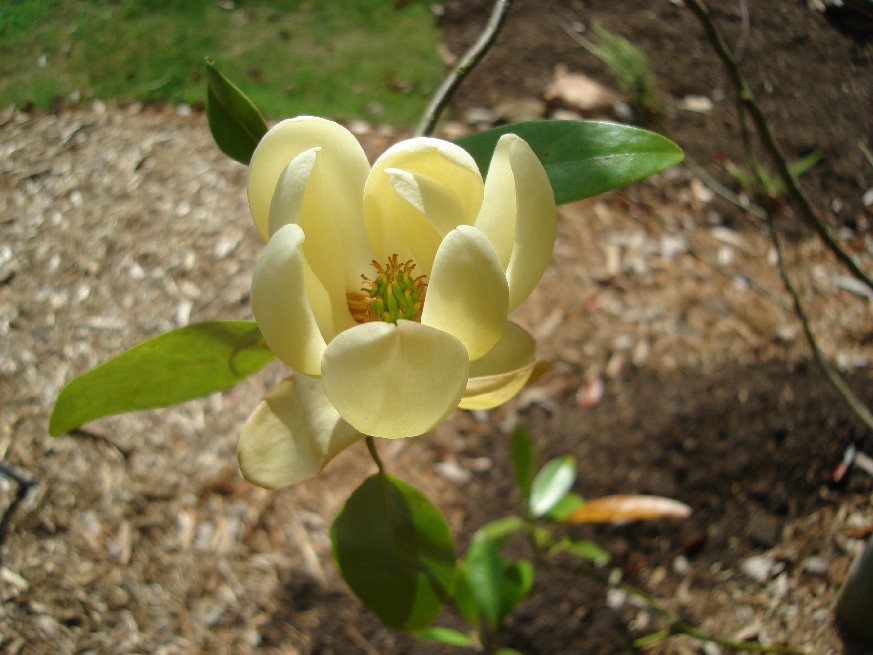 ﻿With all the rain we had last spring, it was not hard to find the rain garden fulfilling its purpose of catching rain. Lilies have also been added in the following picture. 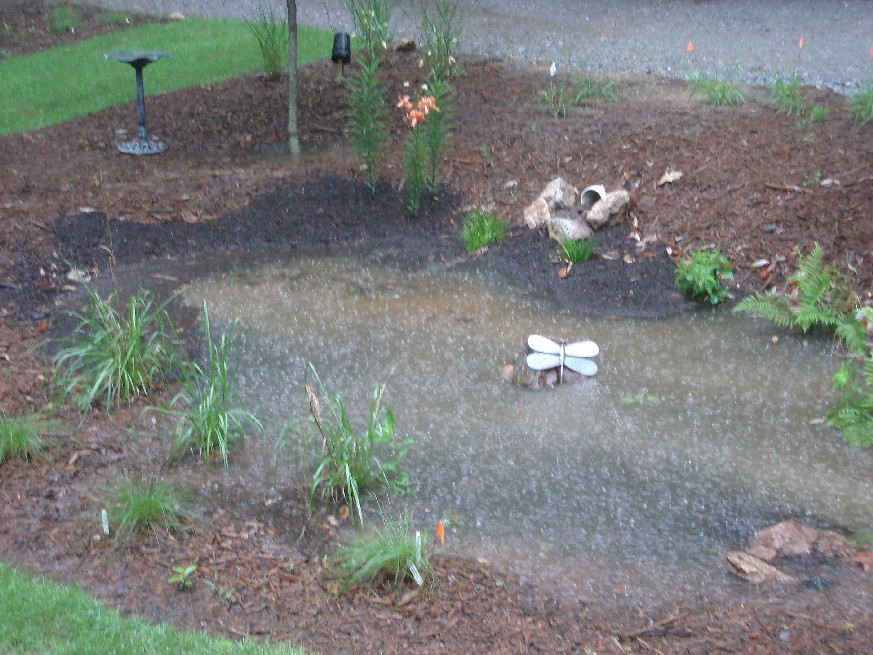 Then we had even more lilies blooming. The picture below also shows the dark compost in the bottom of the garden; it was acquired from the Clarke County landfill. 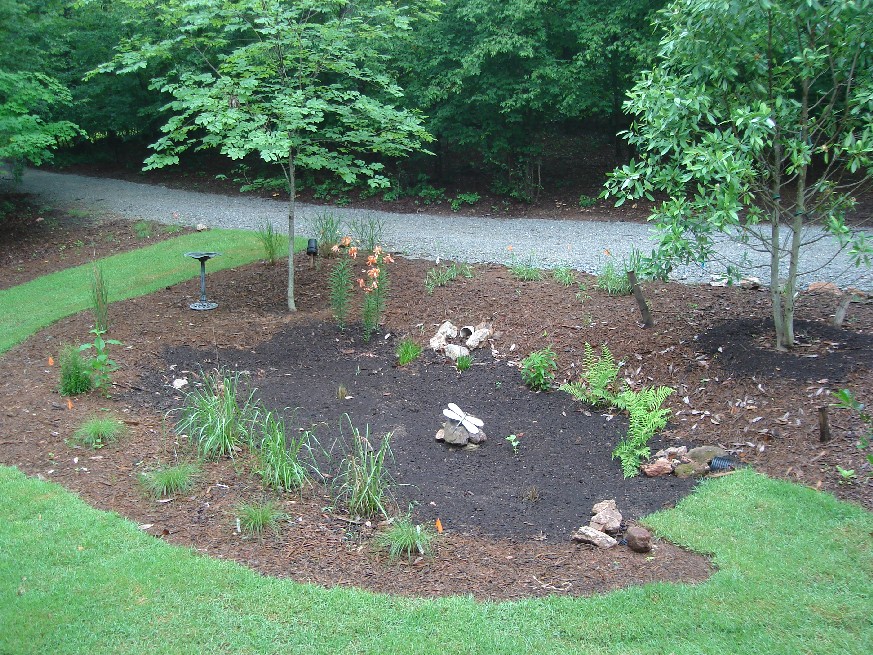 Below is the same view from the driveway. 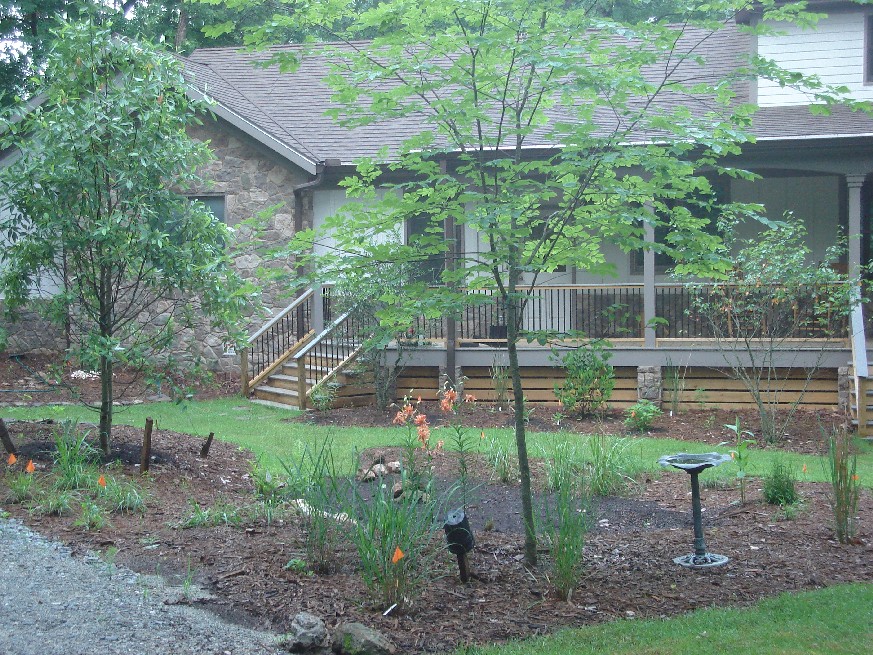 Here we see the lilies blooming in the sun. 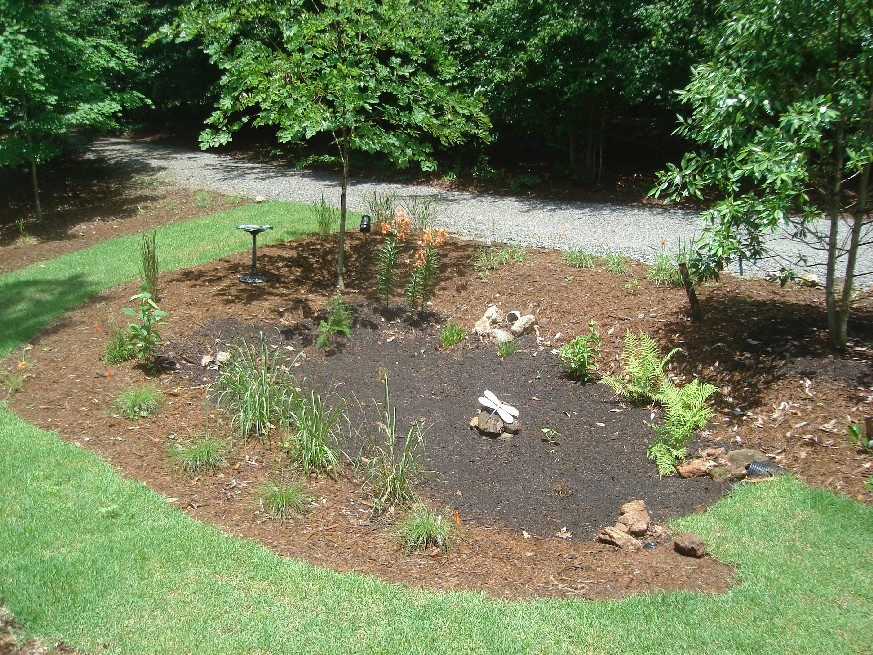