During the past week Manita and I were out of town for five days - the most since January - taking part with our granddaughter Sophia in a Road Scholar intergenerational program at Callaway Gardens. We had been away for only one overnight since construction began. So, when we returned, we were very impressed with the stonework on the front fascade, which you can see below. 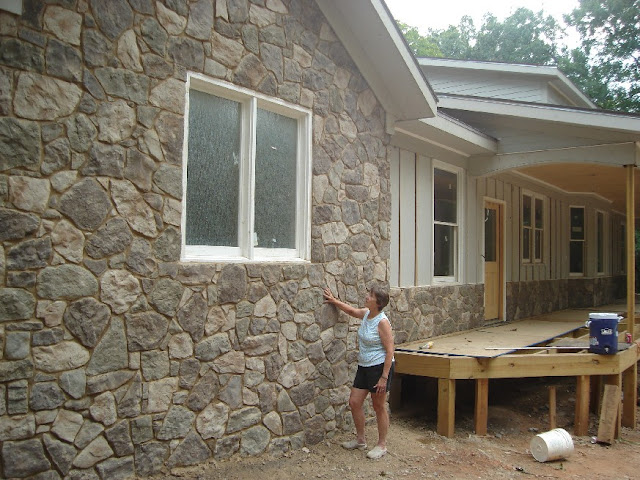 As in the previous house, there is now stonework in the livingroom surrounding the mantle over the woodstove. The stone is still a little damp here and will look more like the outside stone when dry. 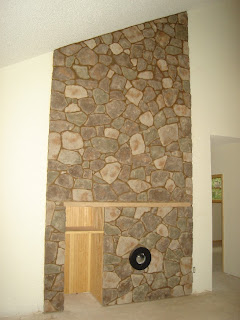 The opening to the left of the flue is for kindling (top) and firewood (bottom). We're already looking forward to a cozy fire on cold winter days. 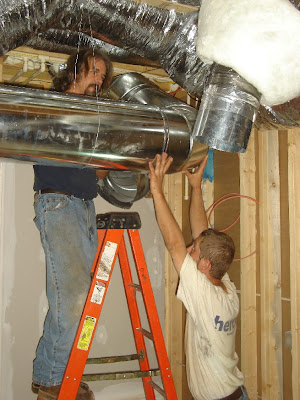 Meanwhile, we found Preston, our HVAC contractor, in the basement, working on getting the ducts hooked up to the ground-source (so-called geothermal) heat pump, which will pull heat out of the earth in winter to heat the house and during air conditioning season pull heat out of the house and put it in the ground.
Here Preston and an assistant are installing one of the supply ducts, and in the next picture the helper is painting the seams to seal them. Another worker is preparing to make another connection to the the heatpump unit behind him.

Once the supply ducts for the two heating and cooling zones, as well as the return ducts, are hooked up, the underground water loop, which circulates through three 240 foot deep wells in the front yard, will be connected to the unit. After all electrical and control connections have been made, the system will be ready for testing and hopefully will pass the test without a lot of correction and adjustment. We'll let you know in our next blog post how it all comes out. 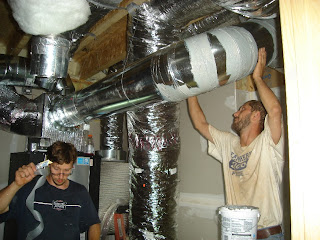 It has now been thirteen weeks since framing began, and a lot has been accomplished in that three months. Hopefully, about two more months will be enough to finish the house. We'll be ready for that to happen. We don't look forward to moving, but it will be worth it. At least we have less to move this time.  --oc