Pictures of past and pending progress

Lots of little things are happening at our house, and lots more are about to happen. First, the front and back yards around the house got cleaned up, and two truckloads of fill dirt were added and spread around. Here is a view of the nearly finished west end of the house. 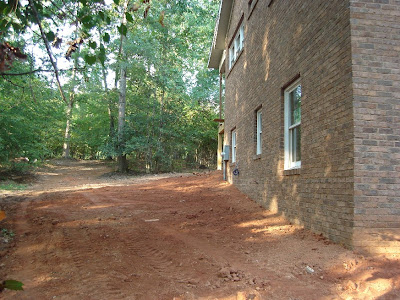 A great deal of the current construction is going on inside and involves wood. Below left , for example,is part of the oak flooring that will be installed in the living room. It is stacked in the way shown, so that it can dry out a little more and get accustomed to the house before installation. On the right is some knotty pine paneling and wainscoting our builder has installed in the stairway down to the basement. The two-by-four treads shown here will later be replaced by plywood and carpet. 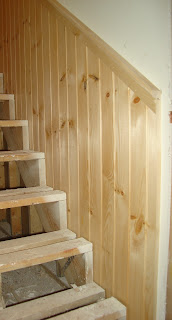 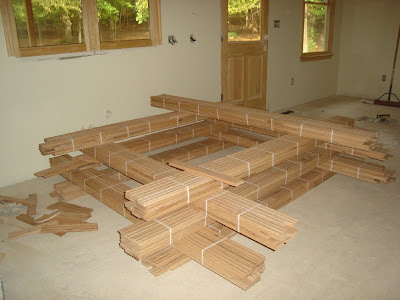 The space occupied by the flooring is in the kitchen, and it will eventually be replaced by cabinets that are being built by our neighbor, Paul Pringle. Here he is planing oak planks for that purpose; they were sawn from trees that had fallen in a neighbor's yard here in Kenney Ridge. They will be a fitting replacement for the living room hickory paneling that was sawn from trees cut down to make room for our previous house. 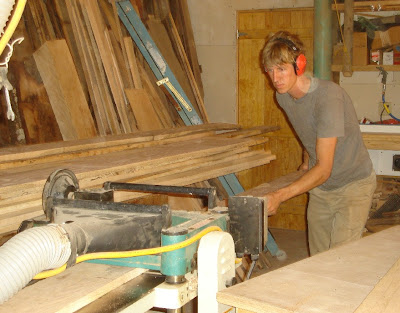 Another recent accomplishment is the completion of the geo-thermal heat pump installation. The picture below shows the electrical power coming in on the left, and on the right are the pipes to and from the underground water loop and the two pumps that circulate the water through the heat pump and the loop. 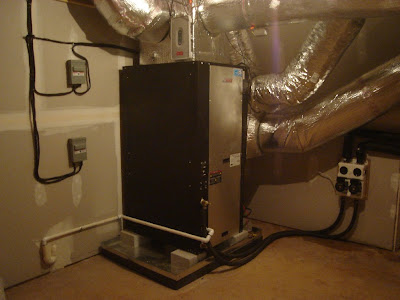 Meanwhile, in the backyard is a stack of tile conveniently left by the door to the basement den, where it will be laid starting tomorrow (Monday). Manita shows how well the tile goes with the brick wall behind the downstairs stove shown in last week's blog post. 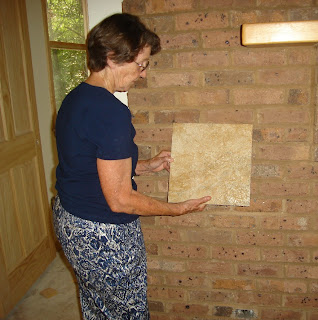 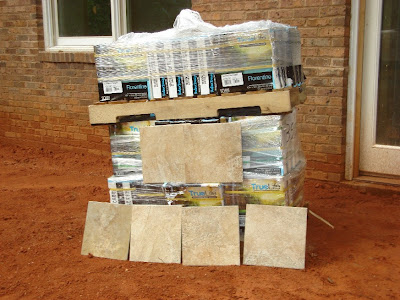 That can also be seen in the second picture, which shows the tile stacked by the door to the room where it will be laid. It also shows some of the red Georgia dirt fill that was necessary to bring the ground level up to the basement level.

On the list to be completed soon is the covering of the front porch and rear deck with composition planking. I'll save that coverage, however, until later, when there's something to show.