Last week I mentioned that we were out of town for a while, but I didn't mention that our builder George was also out of town with his family - way out of town, like in Alaska (we were envious). But he was back on the job by Thursday and did some more carpentry work in the form of bookcases in the loft. 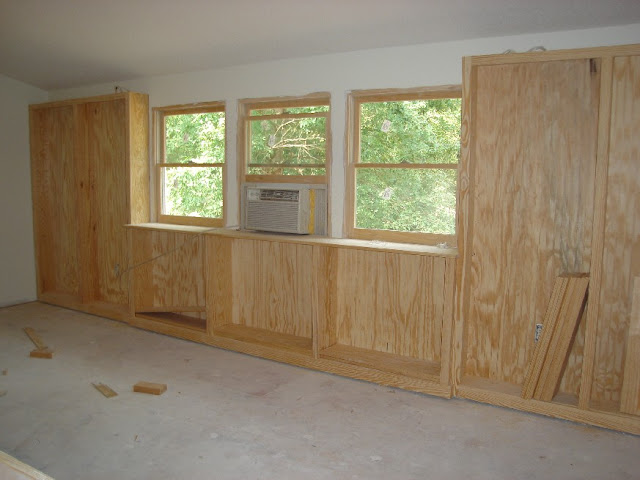 In addition to storing books, the loft will be an area for playing with our grandchildren, Sophia and Ezra, and for doing various projects, such as wrapping presents. The window air conditioner is a temporary measure to keep workers cool and help dry out the house. Hopefully the HVAC folk will be back soon to finishing installing the ground-source heat pump system in the basement. 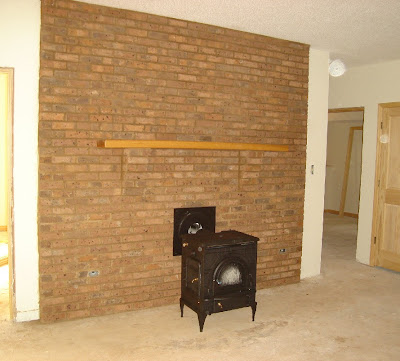 On Monday we got the final brickwork done in the basement behind the wood stove, along with a refinished mantle that was made from a hickory tree cut down on the property to make room for the house. Both it and the upstairs stove (below) survived the fire and were returned in newly refinished condition.

Actually, they arrived a little early, and we would have preferred a later delivery, since we have not yet installed the floor tile for them to sit on. With a weight of about 350  pounds each, it's not a simple matter to move them around. I have figured out the solution to that problem, however: I'll just let George do it. 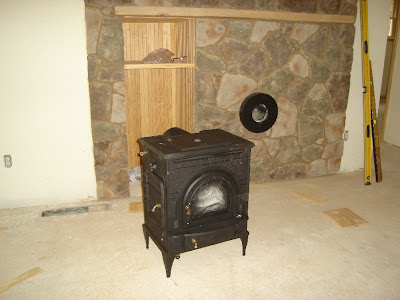 The upstairs also has its own mantle - the other half of the same hickory board - but the tile has not been installed there, either. Both tiles have been picked out, however, and will be installed soon. In the basement, the whole room will be tiled, but upstairs we'll have tile only under the stove and by the front door and the door to be back deck. The rest of the floor will be covered with hardwood. 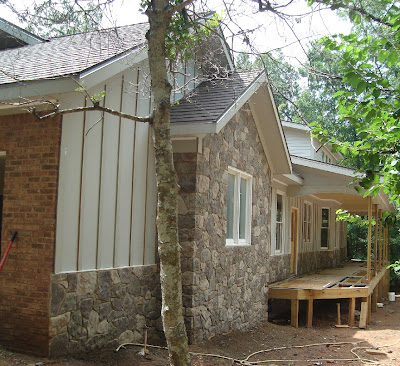 Finally, we have a picture of the front of the house with the garage on the left, featuring the flagstone - called Mossy Creek - and the board-and-batten siding. The next step (so we can take steps) is to put down the decking here and on the back deck. We'll also be adding two sets of front stairs and horizontal boards in between to hide from view whatever's under the porch.

On Saturday Manita and I purchased six major appliances for the kitchen and the laundry room. Then on Sunday we bought a nice dining room suit. So, it's gradually coming together.  --oc
Posted by O C at 6:24 PM