About the only thing left to do in our house rebuilding project, after preparing the garage floor and giving it an epoxy  finish, was to complete the landscaping. So far we had seen the building of two retaining walls  out back, the digging of a rain garden in the front, and the burying of pipes under the driveway and in the yard to bring water under the drive and from three downspouts into the rain garden. We had also seen the grinding of a big stump near the kitchen door.


Last week, however, a real transformation took place, as our landscaper Greg brought in trees, shrubs, and sod to fill in the landscape plan. Here he is digging a hole by the kitchen steps for the large yaupon holly lying on the ground and covered with red berries. It replaces a tall holly tree that stood in the same spot, but which burned up in the fire. 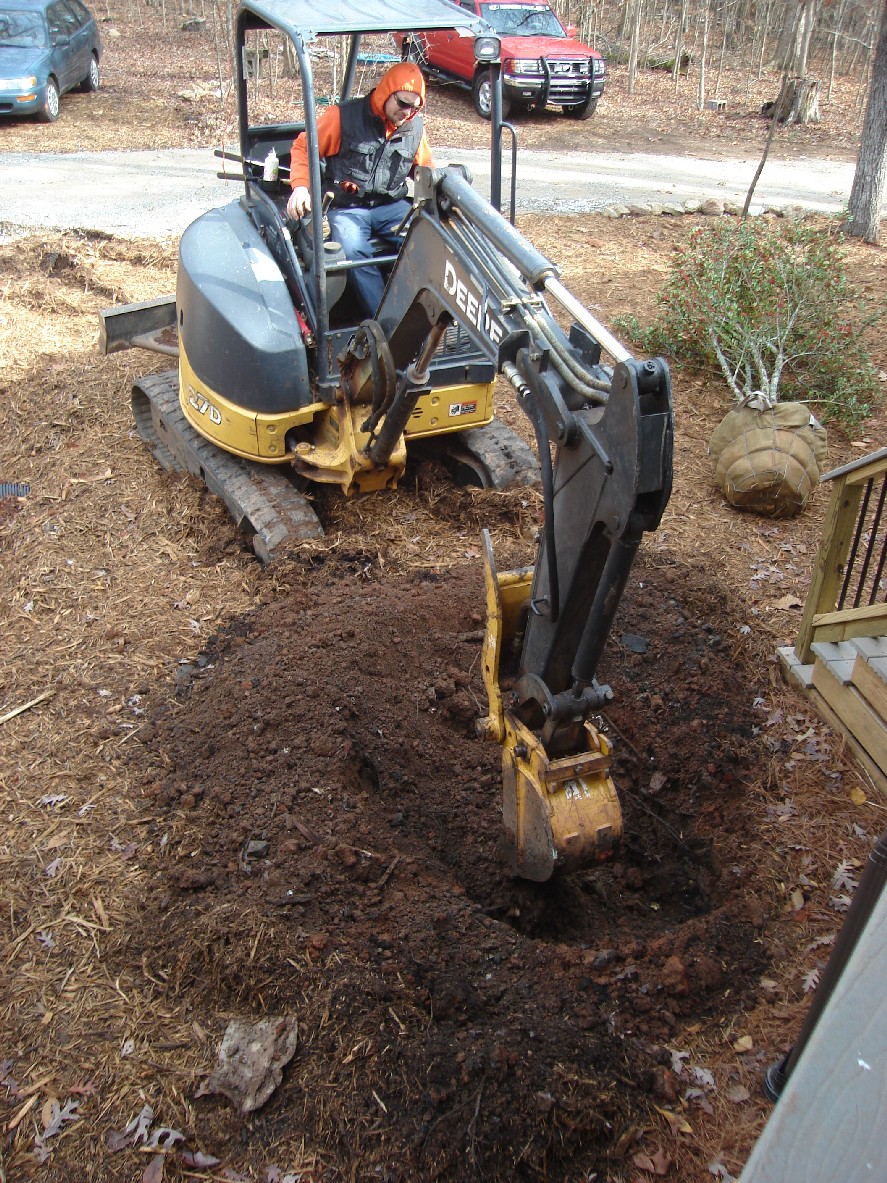 In the next picture, Greg and his helper are planting a sweet bay magnolia on the edge of the driveway and the rain garden. Note the holly's berry-covered branches that got into the picture on the right. 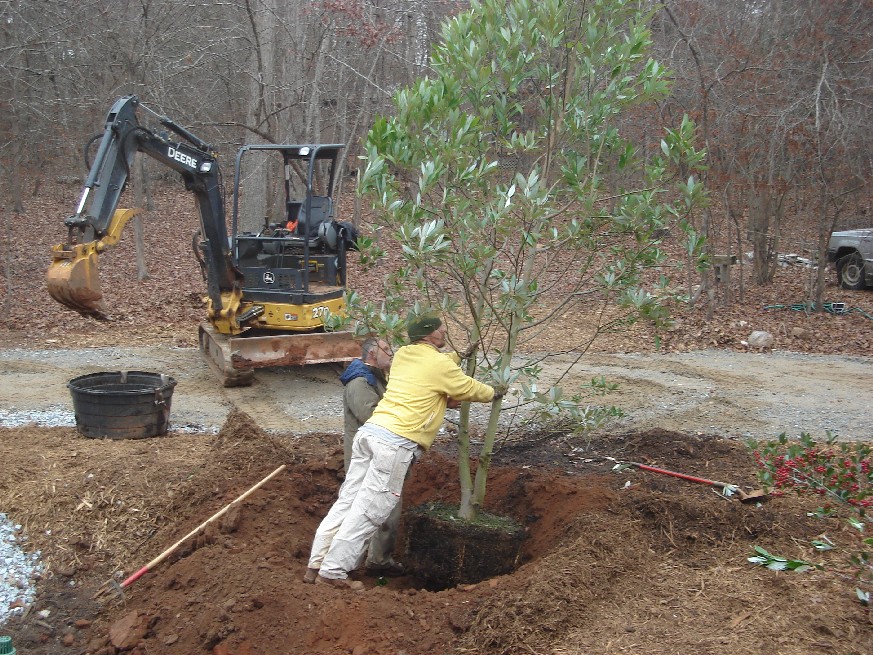 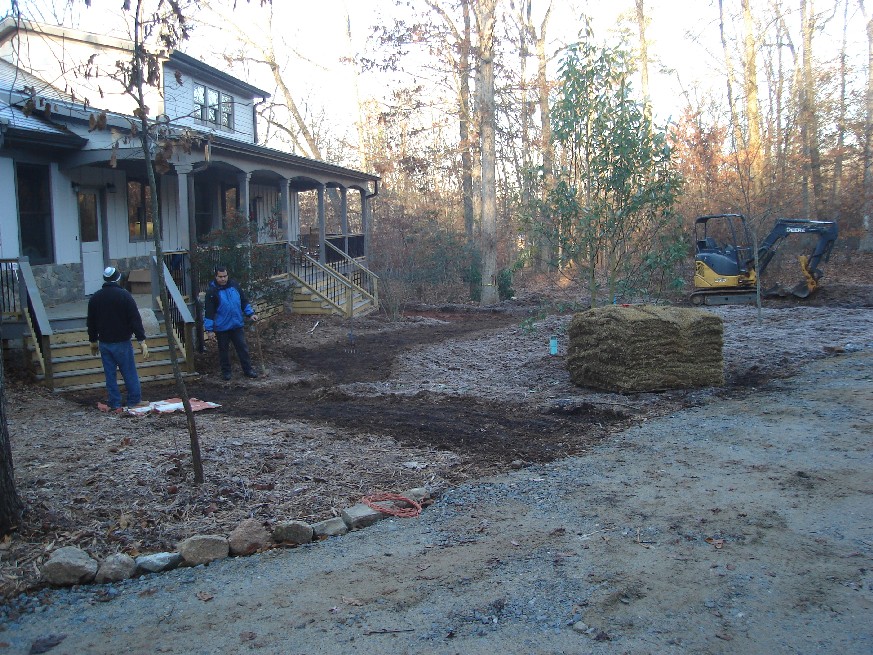 ﻿After a few more plants, Greg was then ready to install the zoysia turf, which arrived at 7:00 one cold morning last week. Here we see one of the two stacks of sod waiting for these two workers to prepare the ground and lay out the turf. To the right of the far end of the porch and behind a big oak trunk is a holly tree that survived the fire.

The next picture below shows the turf and other plants that have been put in place after the picture above. You can also see the pathways formed by the turf, which also surrounds the rain garden on three sides, as well as the bare branches of a yellowwood tree on the near side of the rain garden (see also the next picture). Eventually additional plants will be placed in the rain garden and in other parts of the yard. 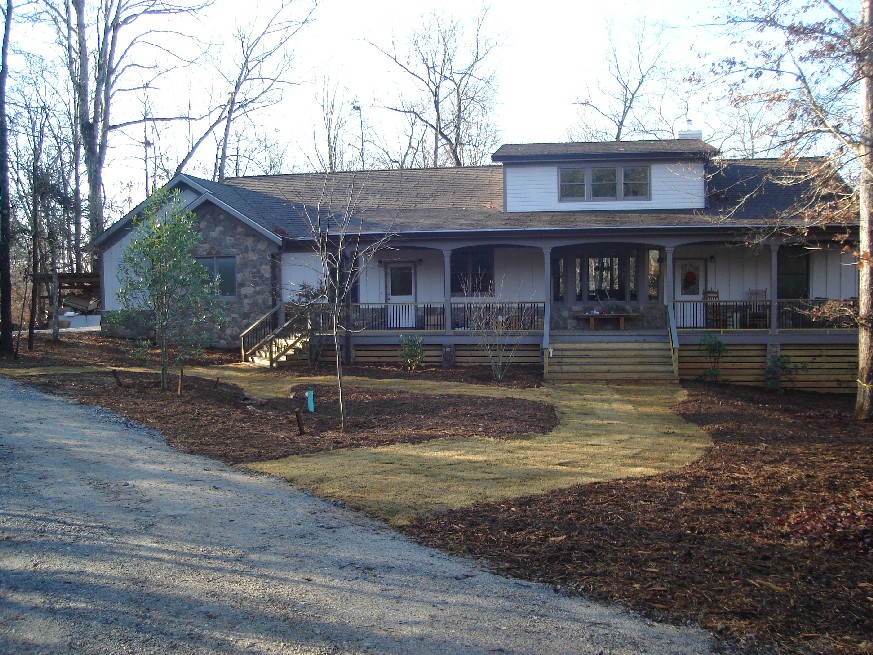 The picture below shows the yellowwood tree on the left side of the screen. That tree is also a survivor of the fire, but it had to be temporarily moved to a new location last March to make room for the large dumpsters that were filled with the remains of the house that burned last January as it was demolished. I made many trips with 18 milk jugs of water to pour on the transplanted tree to keep it alive, until it could take root in its new location. Now it is back in approximately the same position as before the fire. The tree itself is hard to see, but you can see its shadow extending onto the driveway. 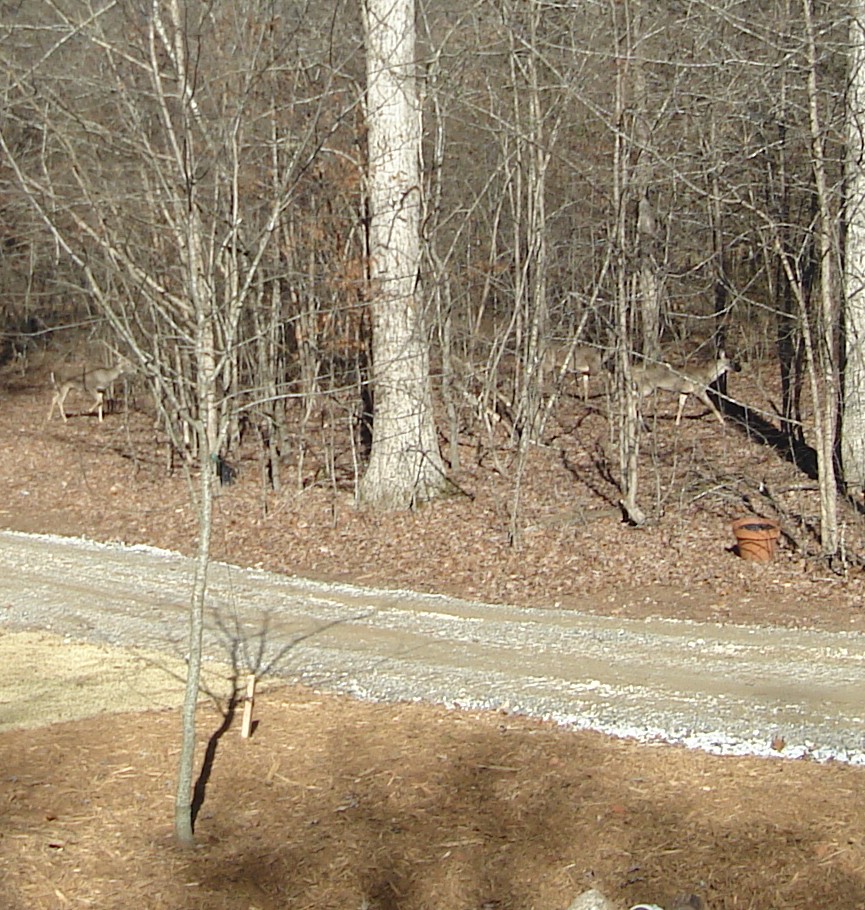 Beyond the driveway and among the small trees, three deer are making their way across the yard, a regular occurrence in our front yard.﻿

Finally, here is a picture of an interesting phenomenon 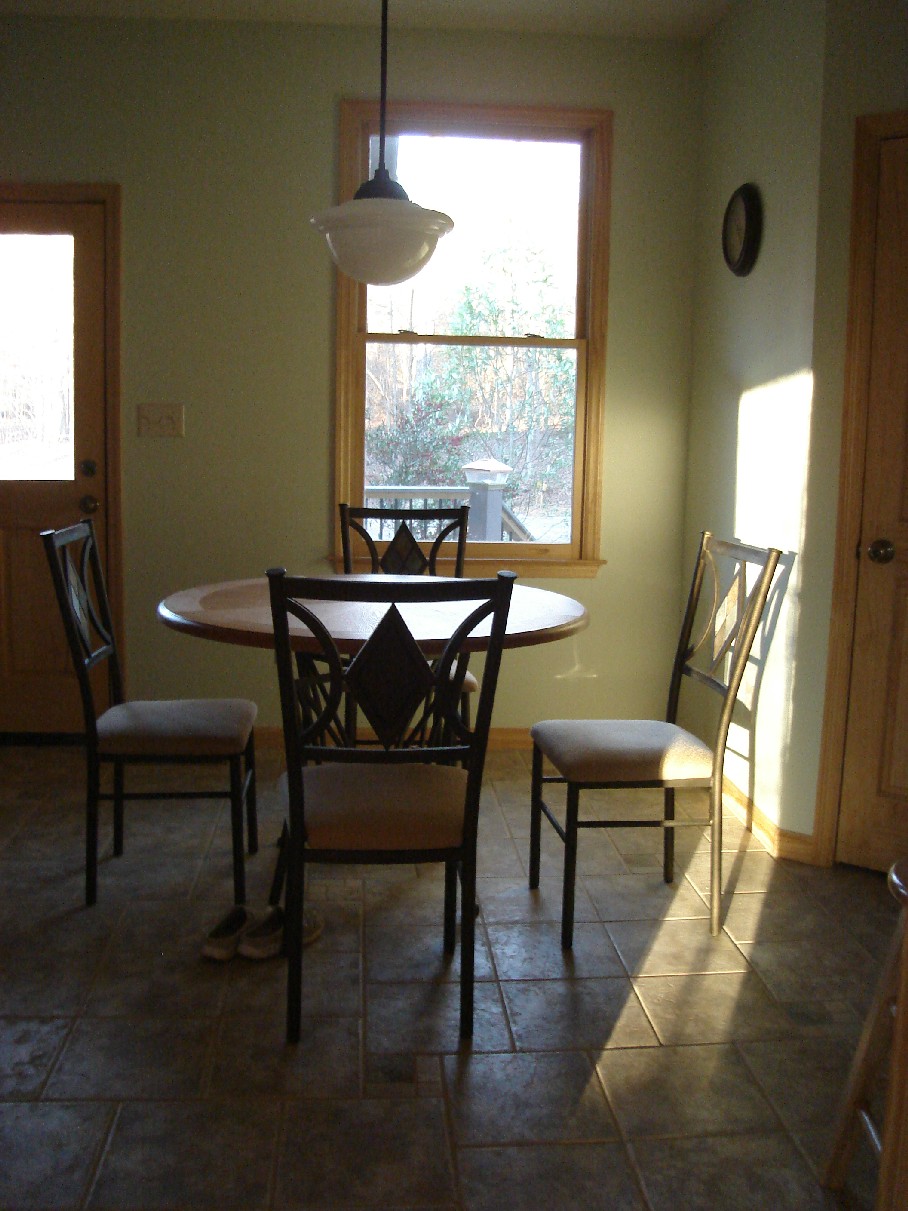 I noticed on the afternoon of the winter solstice last Friday. Just before the sun set behind the wooded ridge across the Middle Oconee River from our house, it was shining into the bay window of our bedroom, through the door into the laundry room, and into the kitchen. If the alignment had been just a little different, it would have continued through the breakfast nook and out into the front yard. Unfortunately, I cannot claim that the alignment happens only one day a year. Actually, I didn't get my picture until the next day, the first day of winter.

With all the major parts of the project finished, and only a few minor electrical and carpentry items to finish, we think we can finally see the light at the end of the tunnel, and it looks a lot like the bright light in this picture. Way back during the last winter, before we demolished and started the rebuilding, I was often asked when we expected to be (back) in out new (old) house. I was hoping for October, but I answered, "I'll be happy if we get there by Christmas." Well, it's almost Christmas, and we're there. To celebrate, I went out - also on the solstice - and bought a new flat-screen TV. Now that we've proved that we can do without television for a year, I'm ready to see Masterpiece Theatre on a big screen again and not just online reruns on a 17 inch computer screen.

First, however, we have a little unpacking and settling in to finish. Then we'll be ready to plan an open house, and you can come see for yourself what our new house looks like.