Getting sheetrock into and through the garage for the main floor of our new old house was rather routine, but getting it into the basement took some maneuvering - first, to get the truck into the right position. Then it had to be carefully unloaded from the truck and transferred by the crane operator to the basement door, where a 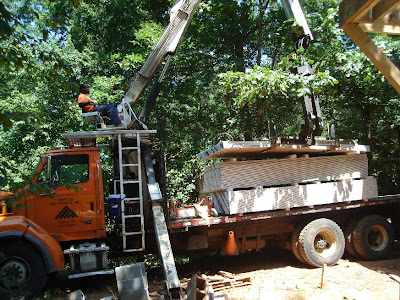 coworker pulled it through the door and onto a cart. The half-inch 9'X5' panels of sheetrock come taped together in pairs to make them less likely to get damaged and to make the unloading go faster. 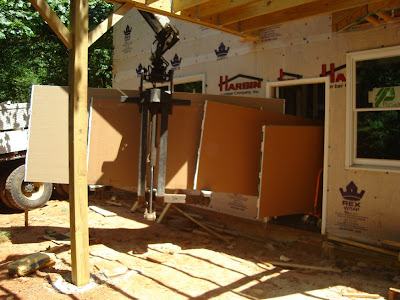 The picture above shows two bundles of two still on the crane on the left, one on the hand cart on the right, and one in the middle being pulled off onto the cart. On the next, somewhat fuzzy photo, you can get an idea of what this process looks like from the inside, with the (very fuzzy) crane operator in the background. 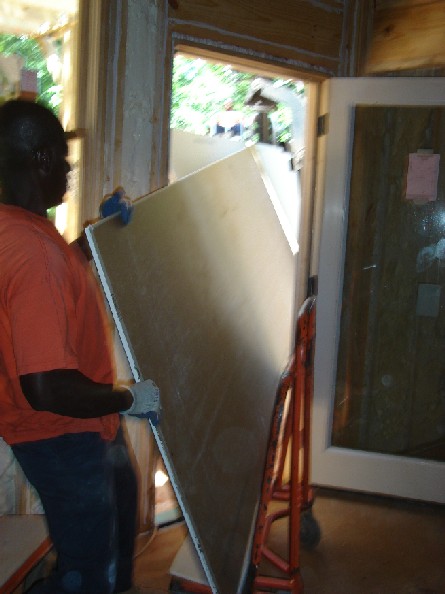 Because the bundles of two sheets weigh so much, they are simply allowed to drop onto the cart and later onto the floor, when they reach their destination. Even after being separated, the individual sheets are cut to size before they are moved and lifted up into position. 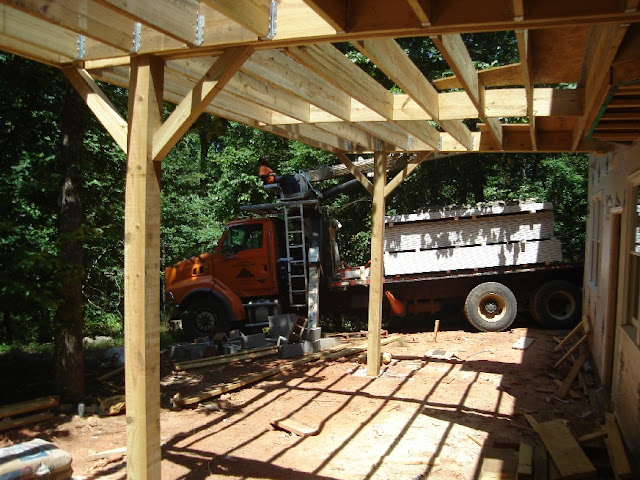 In the view from below the back deck framing, you can see how it was extended two feet from the posts to reach the intended width of 12 feet. Then diagonal braces were added to support the extension and keep it rigid. It looks very much as if that was the plan all along, and I like it.

While the unloading was happening downstairs, a crew of four sheetrockers were already installing panels on the main floor. They plan to get most of that done by next week, so that the finishers can come in and start spreading the "mud" (wet plaster) that will cover up holes, hammer indentations, and cracks. It will take most of next week to complete the job. Then we'll have to wait and see what's next.  --oc
Posted by O C at 3:23 PM