On the 14th of May the framers reached the highest point of our new home. At this point in Germany, there is a "topping out ceremony" with the erection of a small tree, speeches by the builder, owners, and others, and toasts drunk to various people with various wishes. Afterward the glasses are smached against the side of the house and the pieces allowed to fall into the ditch beside the foundation wall. In our country, however, it's rather routine and dull, with only the recognition that the house is now "dried in," if only with tar paper, which then already has holes in it from the nails that hold it down and at least keep it from blowing away.

Since drying in, work on our new house has continued in many areas. The plumbing rough-in was done, the electrical begun, and flues installed for the wood stoves, which were salvaged from the old house. They have now been cleaned up, repainted, and made ready for installation. 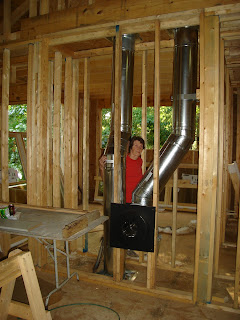 Manita is standing behind the flues on the main floor level; the flue on the left comes up from the basement stove, which will do the main heating in the coldest weather. Like its predecessor, this house will have a ground-source (so-called "geothermal") heat pump, which will either draw heat from the earth (winter) or put heat into the earth (summer), with a little going toward heating hot water.

The house will have one heat pump, but will be divided into two zones, with baffles sending the conditioned air either to the main floor or the basement - or both. Individual thermostats that are programmable will sort all of that out and keep us either roasty-toasty or cool and comfy. One concern with the wood stoves will be providing enough combustion air, since the new house will have foam insulation instead of the cellulose in the old house. The resulting difference between old and new heating requirements is supposed to be about a half ton in heat pump capacity.

Providing that air-tight seal will be accomplished in part by plastic wrap around the outside. The tight-fitting doors and windows and the foam itself, I assume, will take care of the rest. The wrap can be seen around the kitchen door and some of the windows in the shot below. 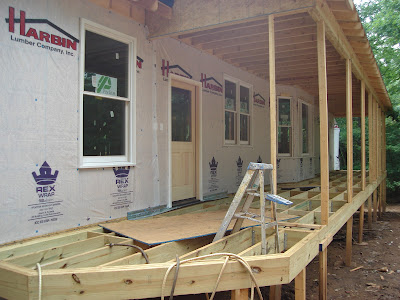 Note also to the right of the kitchen door a double window that replaces a small single window in the old kitchen and provides a lot more light. Farther to the right is the bay window in front of the dining room.