Last Friday, the day after my last blogpost, workers on our house almost finished the roof, which I thought they would surely do today. Instead, they took the day off, but they're due back tomorrow. On Friday, the large dumpster, with all of its trash and scraps of wood and roofing, etc. was hauled off, as workers finished up a corner of the garage roof. That dumpster has now been replaced with a smaller and cheaper one. 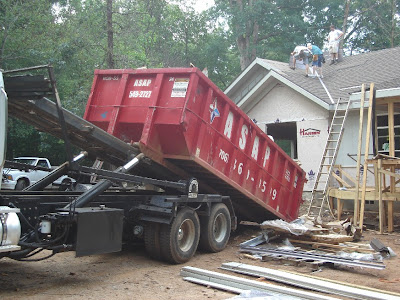 Today we had visits from two building inspectors, one for wiring and one for framing. We had a small problem with the framing of the back deck, which was supposed to be 12 feet wide, but it somehow ended up only 10 feet wide. The problem was to add the two feet without starting the deck framing all over again. Our builder and the appropriate inspector came up with a safe and acceptable solution.

Our friend who represents the DISH network was also here, and we worked out where all the cables and TV outlets would go, as well as the wiring for the security system. The latter will give us added protection against a repeat of our January fire disaster. We have given up on our local cable company, which has been expensive and not reliable for TV and especially not for internet (we now have DSL). DISH will have all the local Atlanta stations, including two PBS channels (our favorites), plus some 200 cable channels.

Once again, the hour is late. Have a good night!  --oc