Little by little it's coming together.

Yesterday (Friday) workmen continued to install the Hardie Board around the edge of the roof, in preparation for the installation of the roof itself, which will hopefully begin next week. That does not mean, however, that nothing else is happening. Several more windows and doors are now in place, leaving only about a dozen or so windows to be installed. Nine of these come in three-window sets and should go in fairly quickly. As I walked around the house yesterday, I saw several things newly installed. The main electrical panel is in the wall, as is the heavy cable that will connect it to the meter base outside. Most of the cables have been run from the panel to individual outlets and switch boxes, though not yet connected.

In the meantime, here is the temple at Angkor Wat that we visited the day we learned about the fire. 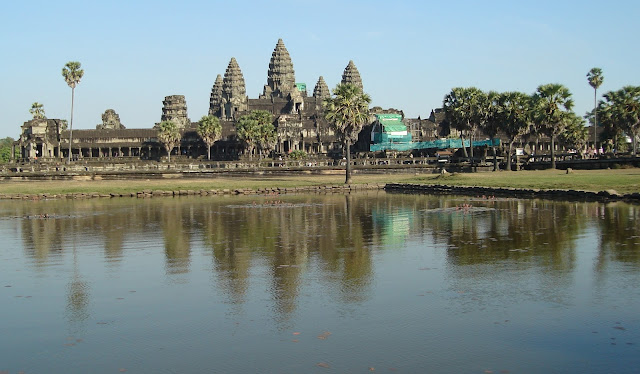 This is the most famous of the six temples we saw durng the last three days of our bike and barge tour up the Mekong from Ho Chi Minh City and Vietnam into Cambodia to Siem Reap, the small town with an international airport, built to accommodate all the tourists that come to the Angkor region. For at least the first couple of days, we kept busy enough to mostly forget about what awaited us back "home," which we usually put in quotes, since our home was no more. But that became ever more present in our minds, as we wrapped up the tour and made the long, long journey back to Athens, Georgia. At least. we had one big, important job to do while traveling: taking inventory of what we had lost and would have to report to the insurance company adjusters. That job is still continuing to this day, but a great deal has been replaced.